The thoughts in my head went something like this:

Yawn! Is it time to get up already? It feels like I just went to bed! Whose bright idea was it to get up early and take photos at this un-Godly hour anyway? Oh yeah, it was mine. Okay. Stop whining and get going. And don’t forget your camera.

Poor Stan! He was still asleep when he came to my room to pick me up this morning. I don’t even think his eyes were open. We made our way to the train and joined all the drunks (literally) and party-ers who had been up all night at the music festival. People were dragging themselves onto the train and then fighting to stay awake so they wouldn’t miss their stop. And we saw two people holding a guy up that was too drunk to stand. Crazy!

Apparently, Paris holds an annual music festival that coincides with Solstice (the longest day of the year).  The organizers coordinate a mix of professional and amateur musicians from all genres of music to perform at various sights around the city including street corners and cafes. All concerts are free and train service on the night of the festival is also free.  It sounds fun, but throw several thousand tourists into the mix (and lots of alcohol) and you can imagine the mayhem.

The morning after looked like a hurricane had blown through town! Parts of the city were LITTERED with bottles, cans, cigarette butts and trash. It looked and smelled disgusting. I felt sorry for the municipal workers who were trying to clean up the mounds of trash everywhere this morning. Why can’t people have a good time without trashing the place? And why can’t they clean up after their flippin dogs … or better yet, leave them at home?

Anyway, I was annoyed because some of the sights I wanted to photograph were so littered with trash it ruined the shot.

Okay, enough whining, we made the best of it.

Our first stop was the Musée de l’Armée (Army Museum) which includes the Dome Church and the Tomb of Napoleon Bonaparte.

A little history on Napoleon: On May 5, 1821, Napoleon died on the island of St. Helena where he had been in exile since 1815. He was buried in the Geranium valley. His remains rested there until October 15, 1840 when they were exhumed and brought to Paris under the direction of Louis-Philippe, who demanded that the English return the emperor to French soil. A state funeral was held and the remains were laid to rest in St. Jerome’s Chapel. Napoleon’s remains were moved again in 1861 when his tomb was completed at Dome Church. 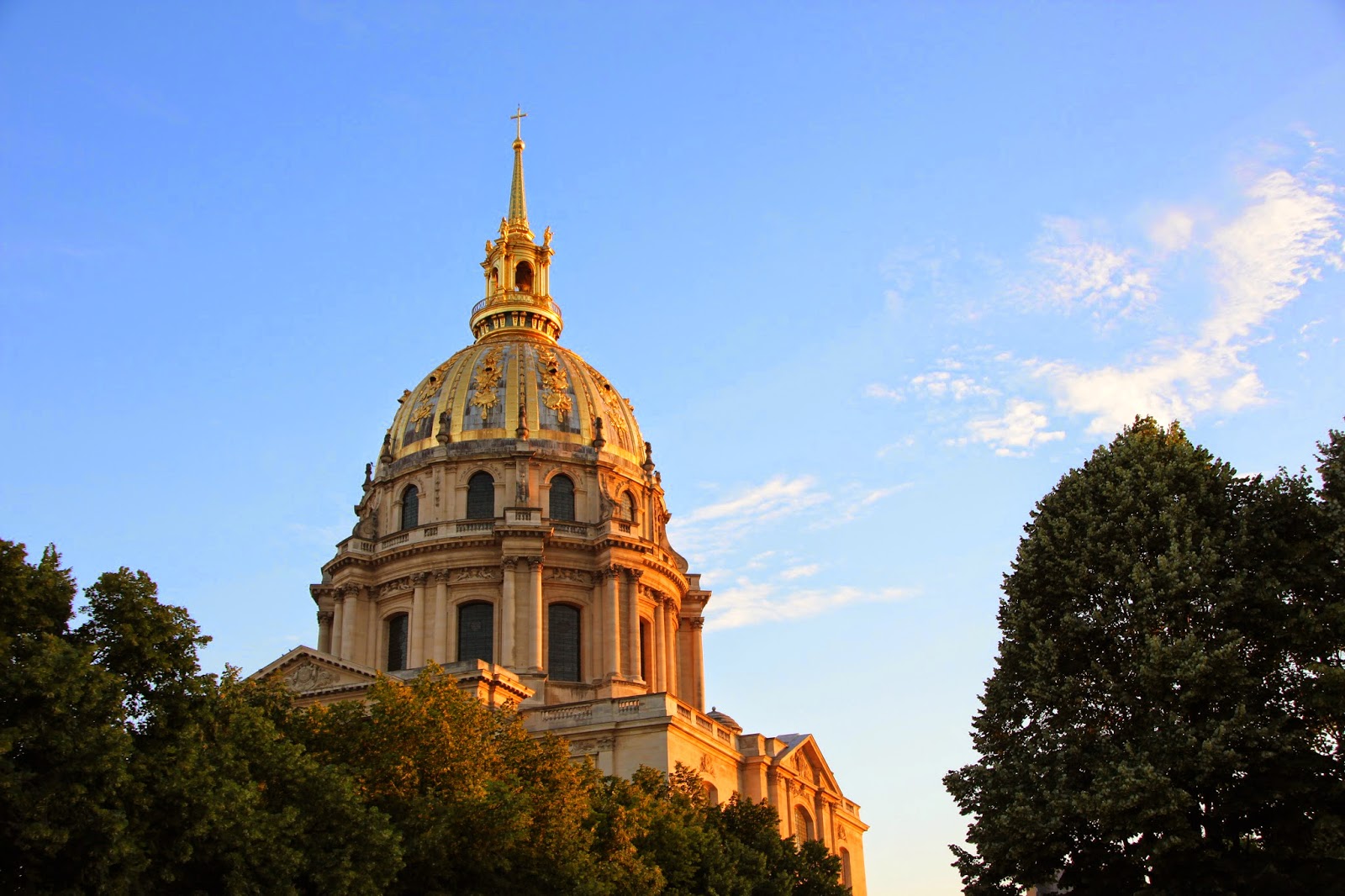 Next stop was the Avenue des Champs-Elysees, one of the most famous streets in Paris which ends at the Arc de Triomphe and is close to the Grand Palais – our third stop.

The Grand Palais is an exhibition hall and museum complex, and directly across the street is the Petit Palais which houses the City of Paris Fine Arts Museum. Both of these buildings were constructed in the late 1800’s for the 1900 Exposition. 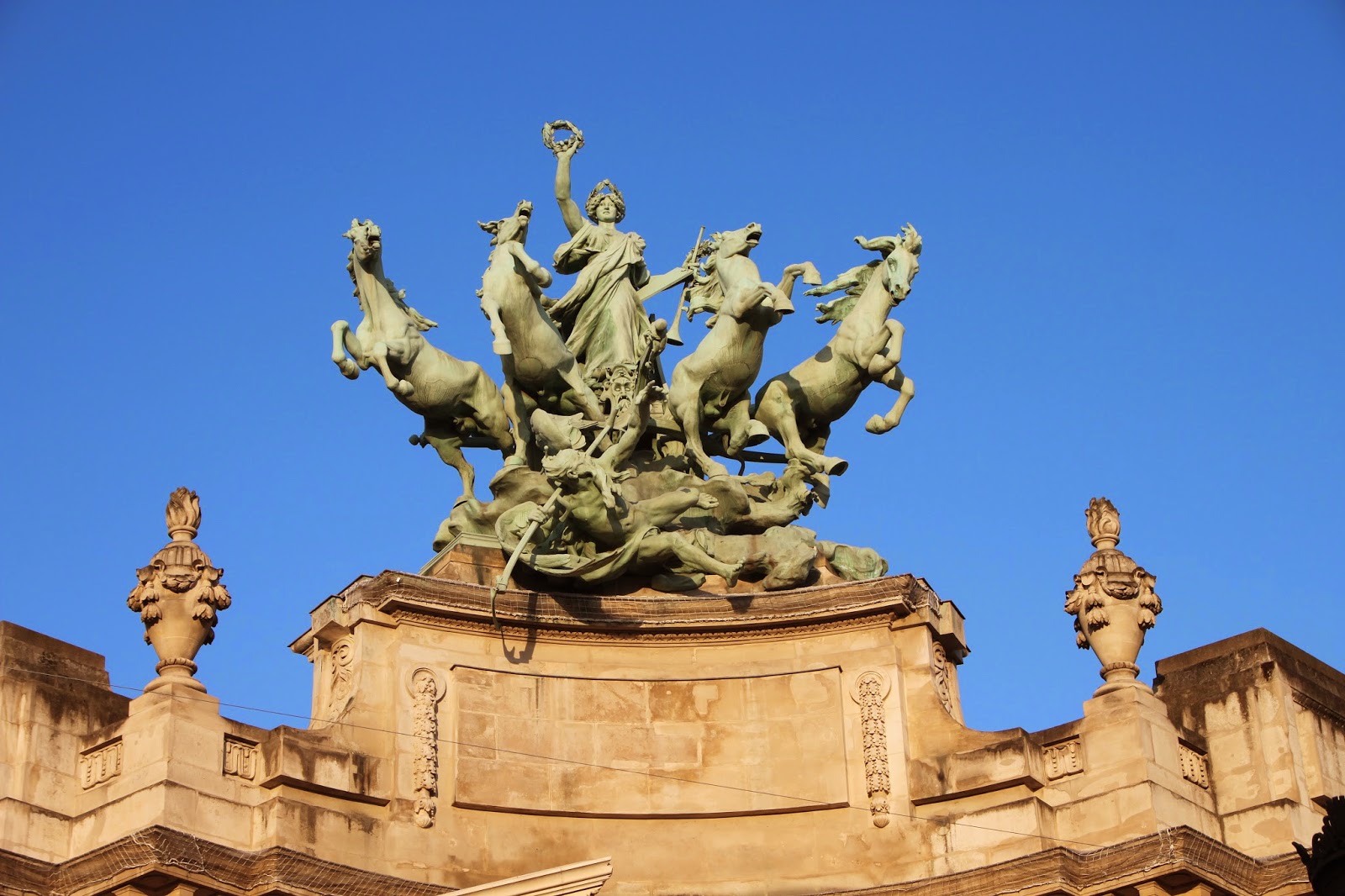 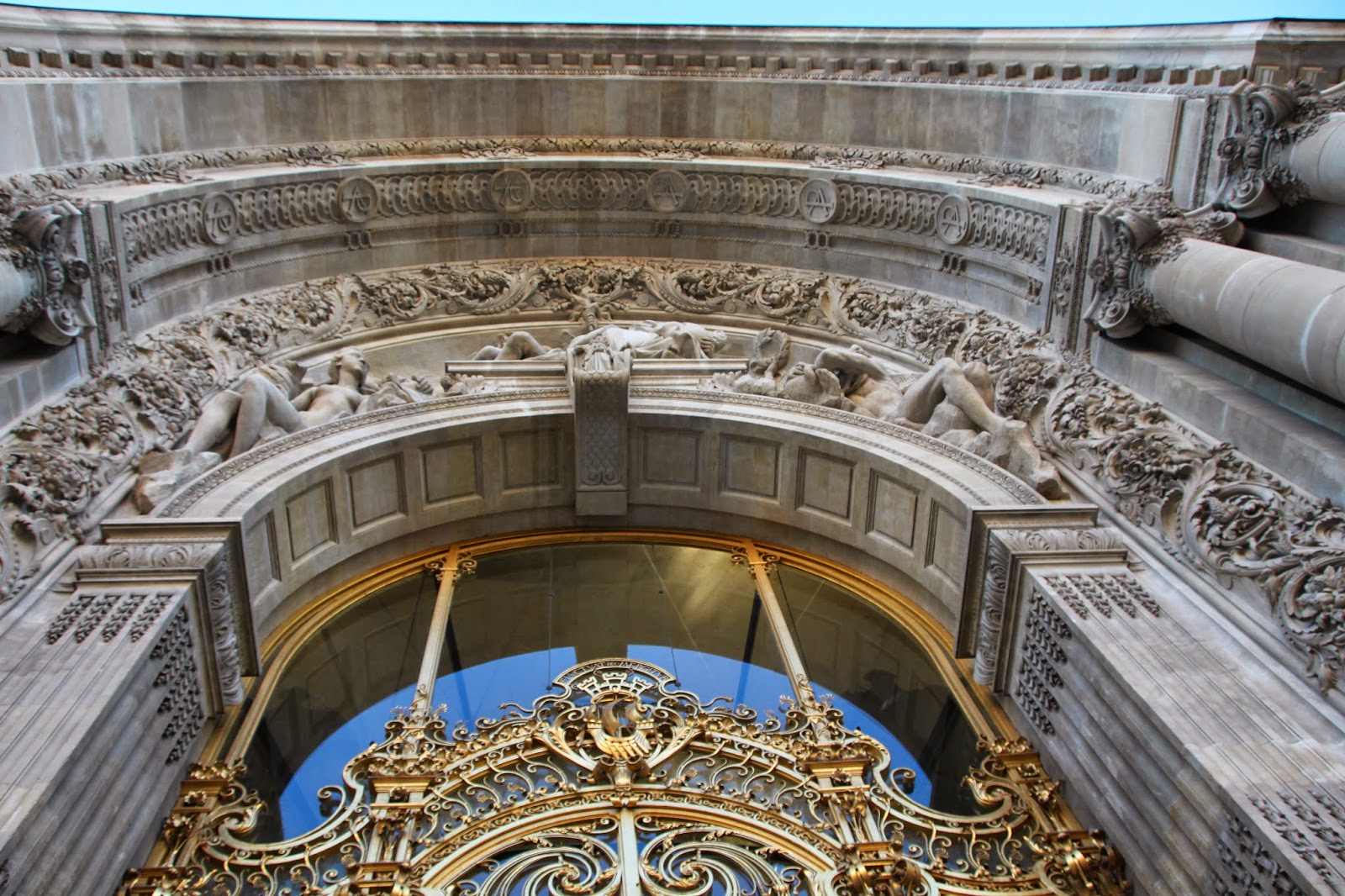 Continuing on, I ran over to the Pont Alexander, III (bridge) that spans the Seine and connects the Champs-Elysees quarter and the Eiffel Tower quarter. This bridge is classified as a French Historical Monument. 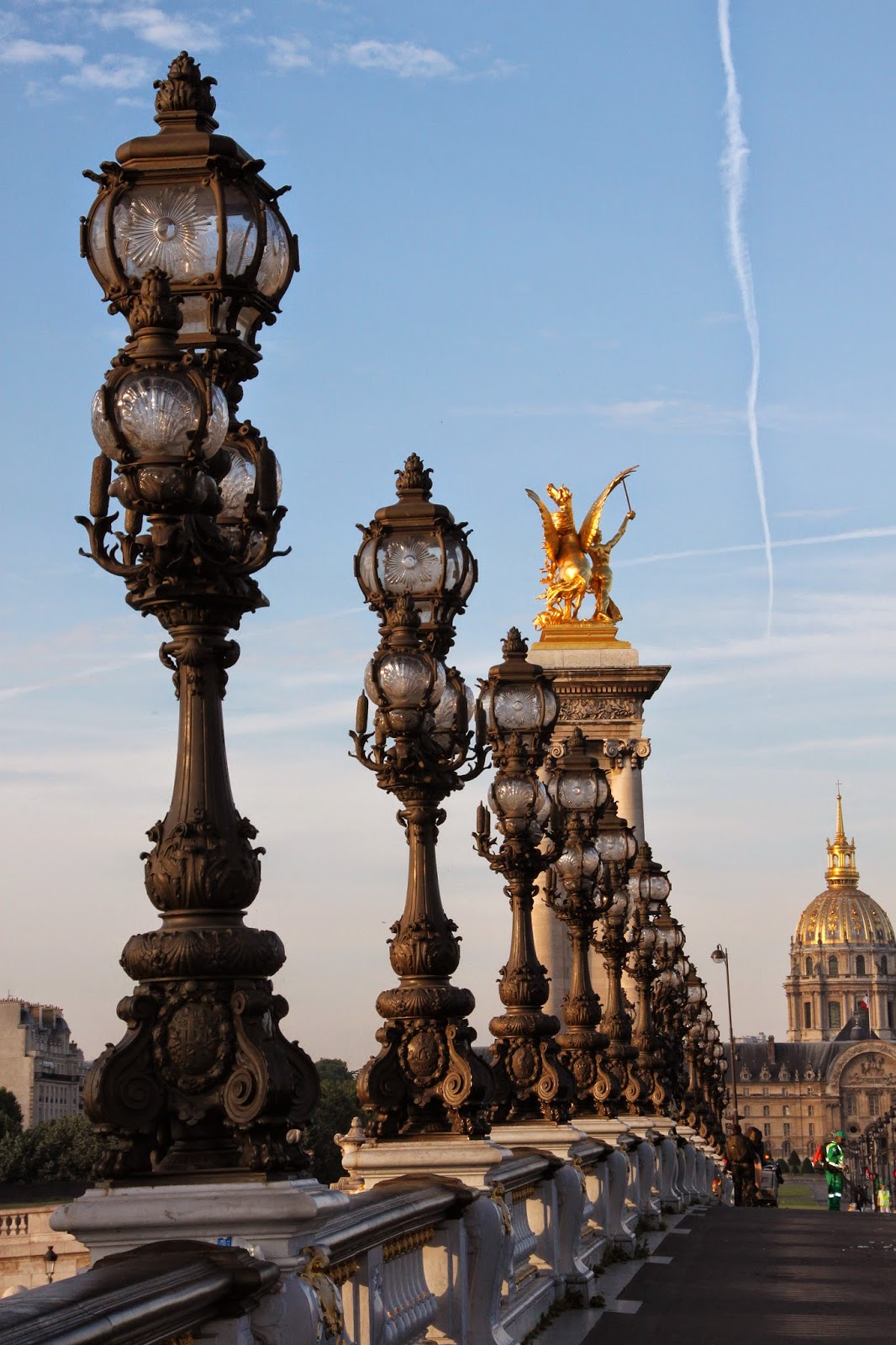 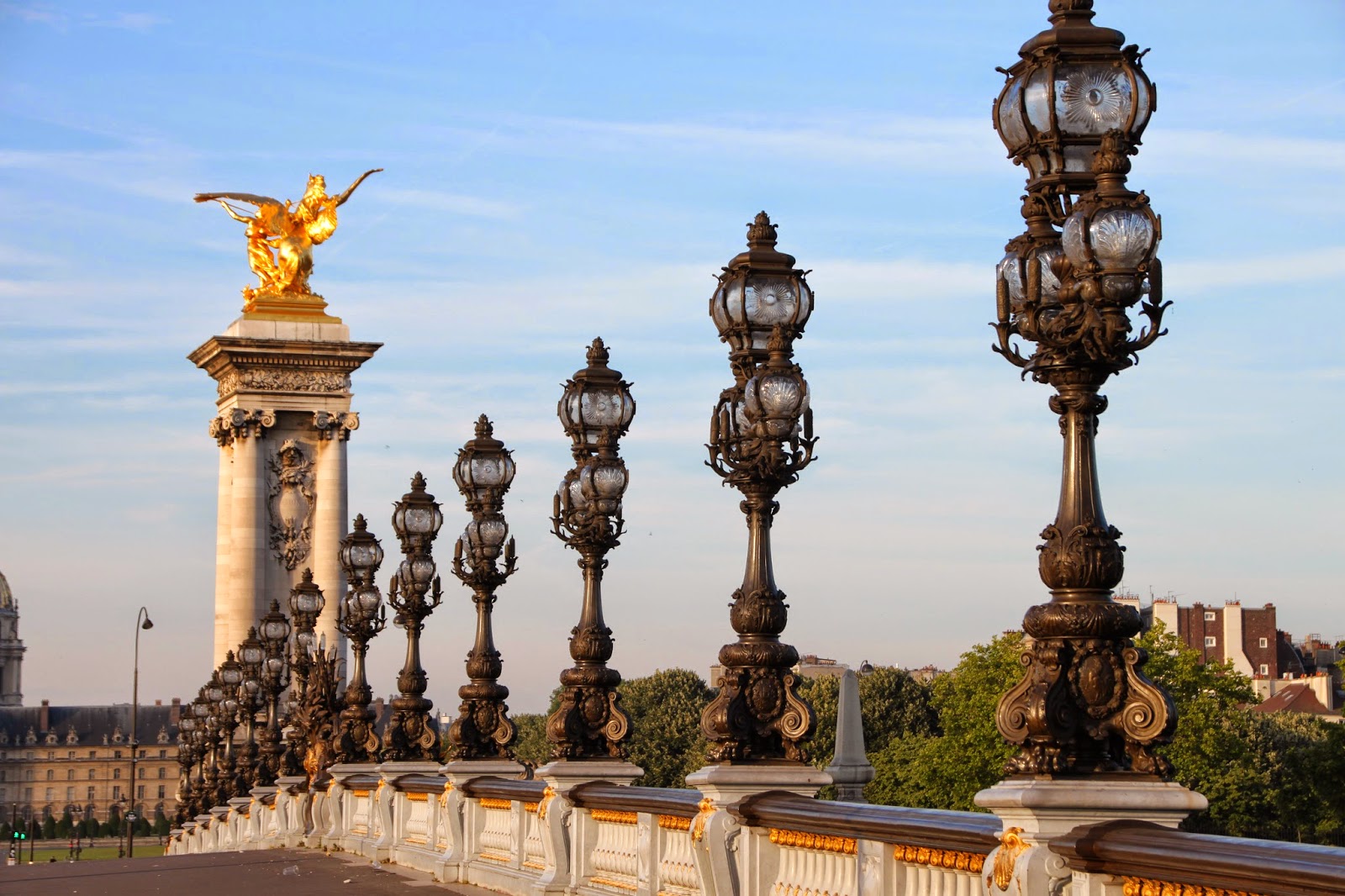 Our final stop before breakfast was the Louvre. This massive complex is too big for my camera-lense to capture, so I included a photo from the Internet.  The glass pyramid structure in the middle of the complex has an interesting story. This is from Wikipedia:

The pyramid and the underground lobby beneath it were created because the Louvre’s original main entrance could no longer handle the enormous number of visitors it receives on an every day basis. Today, visitors descend through the pyramid into the spacious lobby then re-ascend into the main Louvre buildings.
Design historian, Mark Pimiott, “I.M. Pei’s plan distributes people effectively from the central concourse to myriad destinations within its vast subterranean network… the architectonic framework evokes, at gigantic scale, an ancient atrium of a Pompeiian villa; the treatment of the opening above, with its tracery of engineered castings and cables, evokes the atria of corporate office buildings; the busy movement of people from all directions suggests the concourses of rail terminal or international airports.”
The construction of the pyramid triggered considerable controversy because many people felt that the futuristic edifice looked quite out of place in front of the Louvre Museum with its classical architecture.  Certain detractors ascribed a “Pharaonic complex” to Mitterrand. Others praised the juxtaposition of contrasting architectural styles as a successful merger of the old and the new – the classical and the ultra-modern. 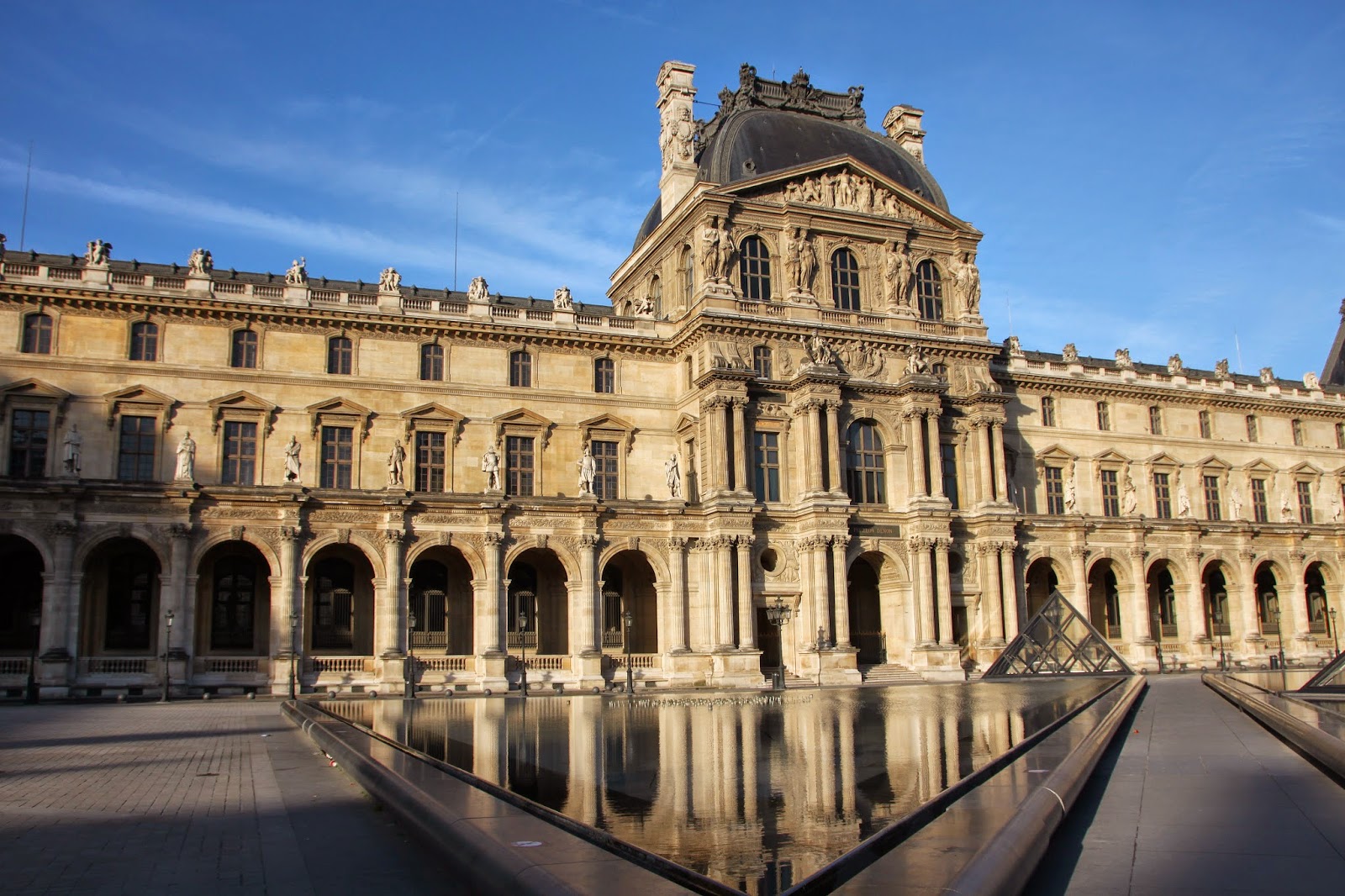 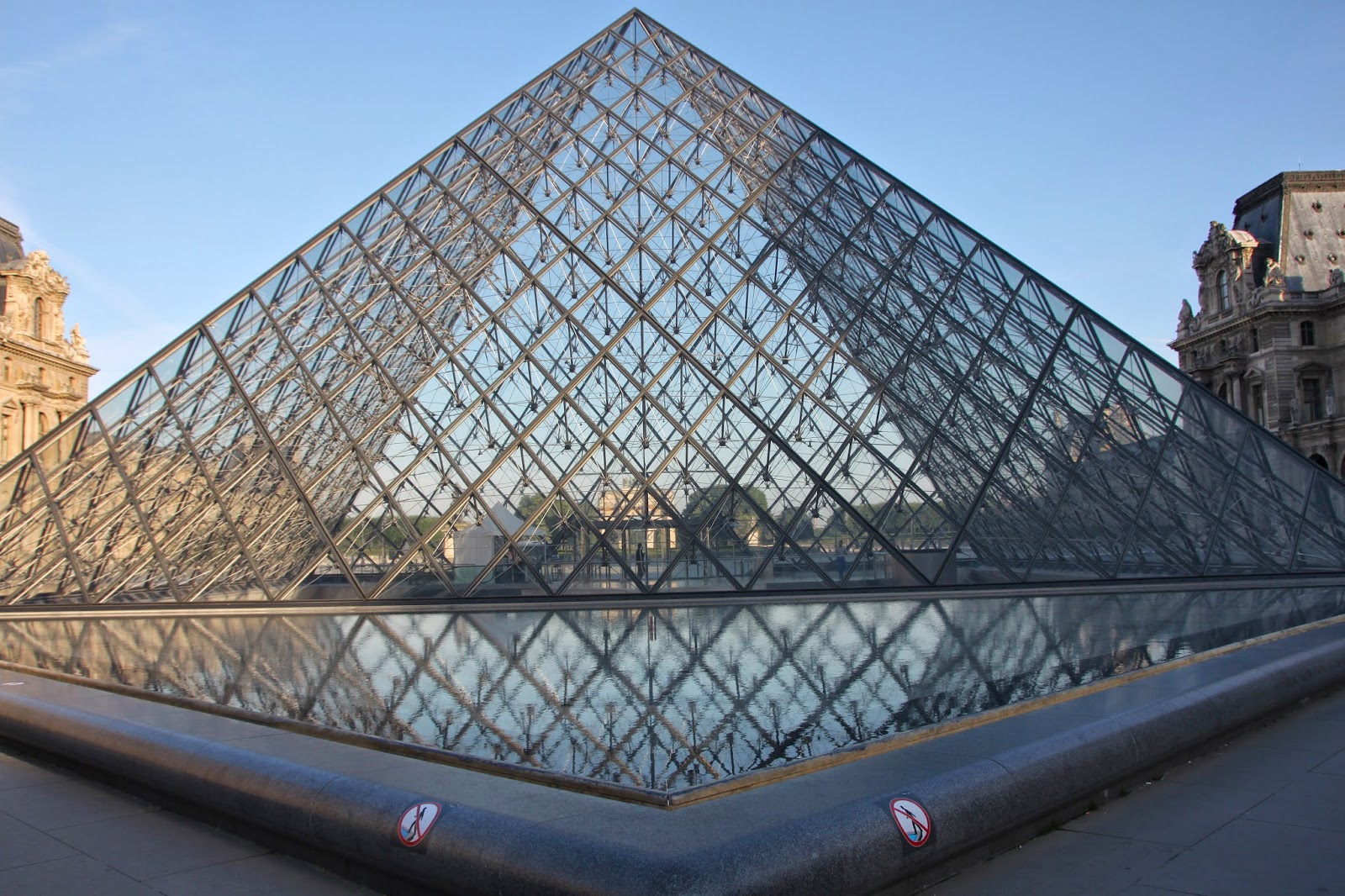 While we were there, I couldn’t resist taking a few shots of this bride and groom! 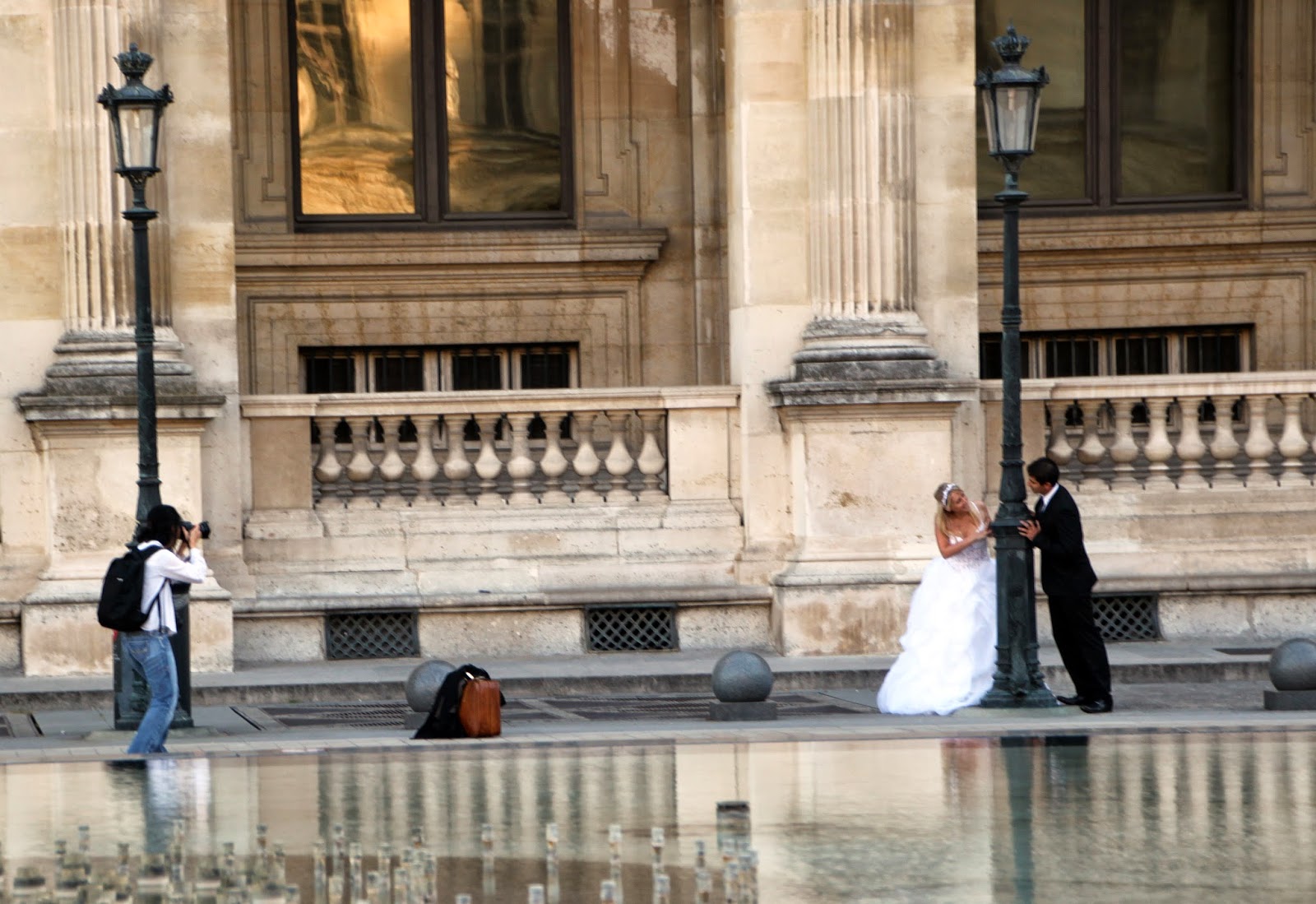 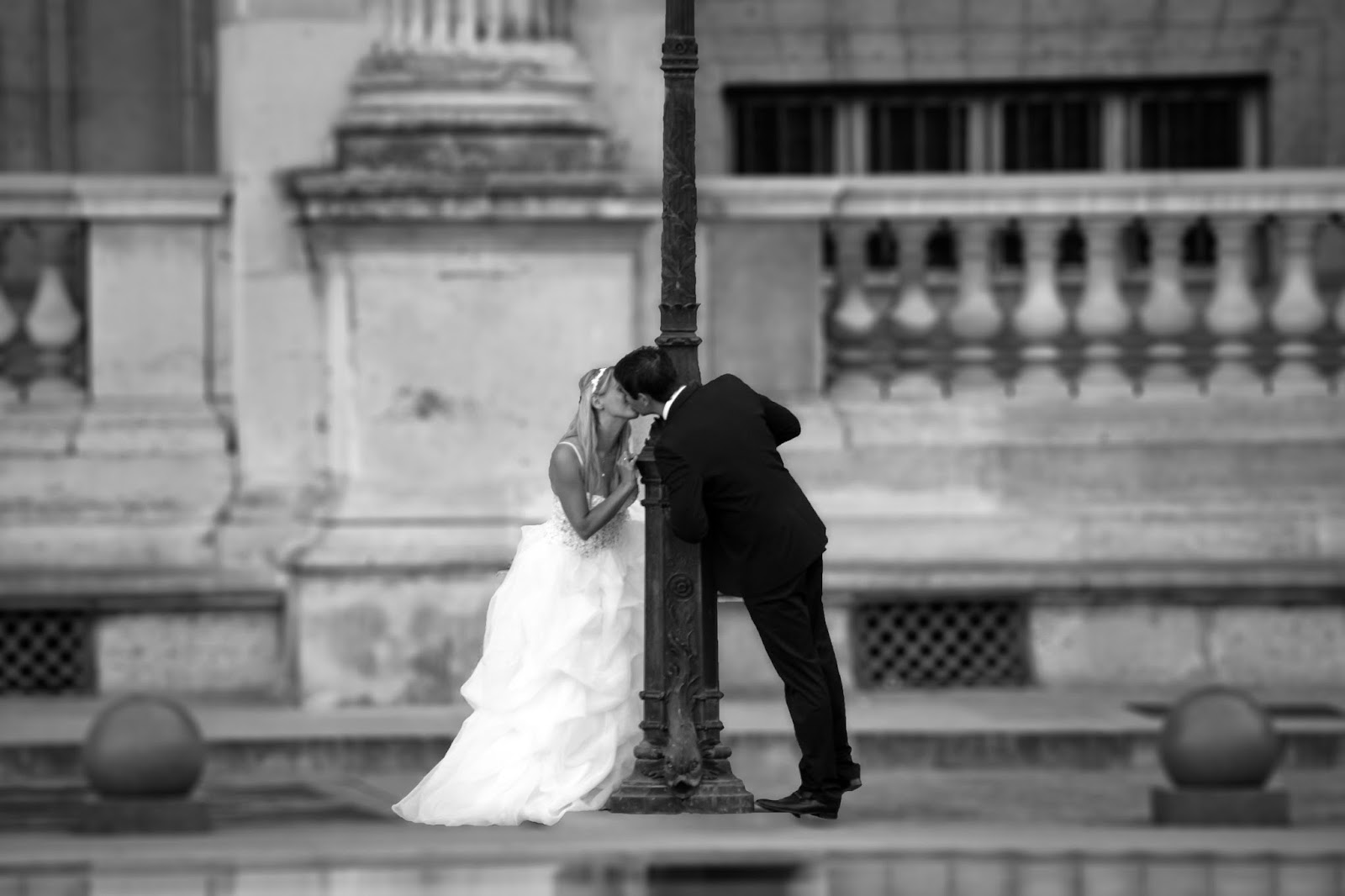 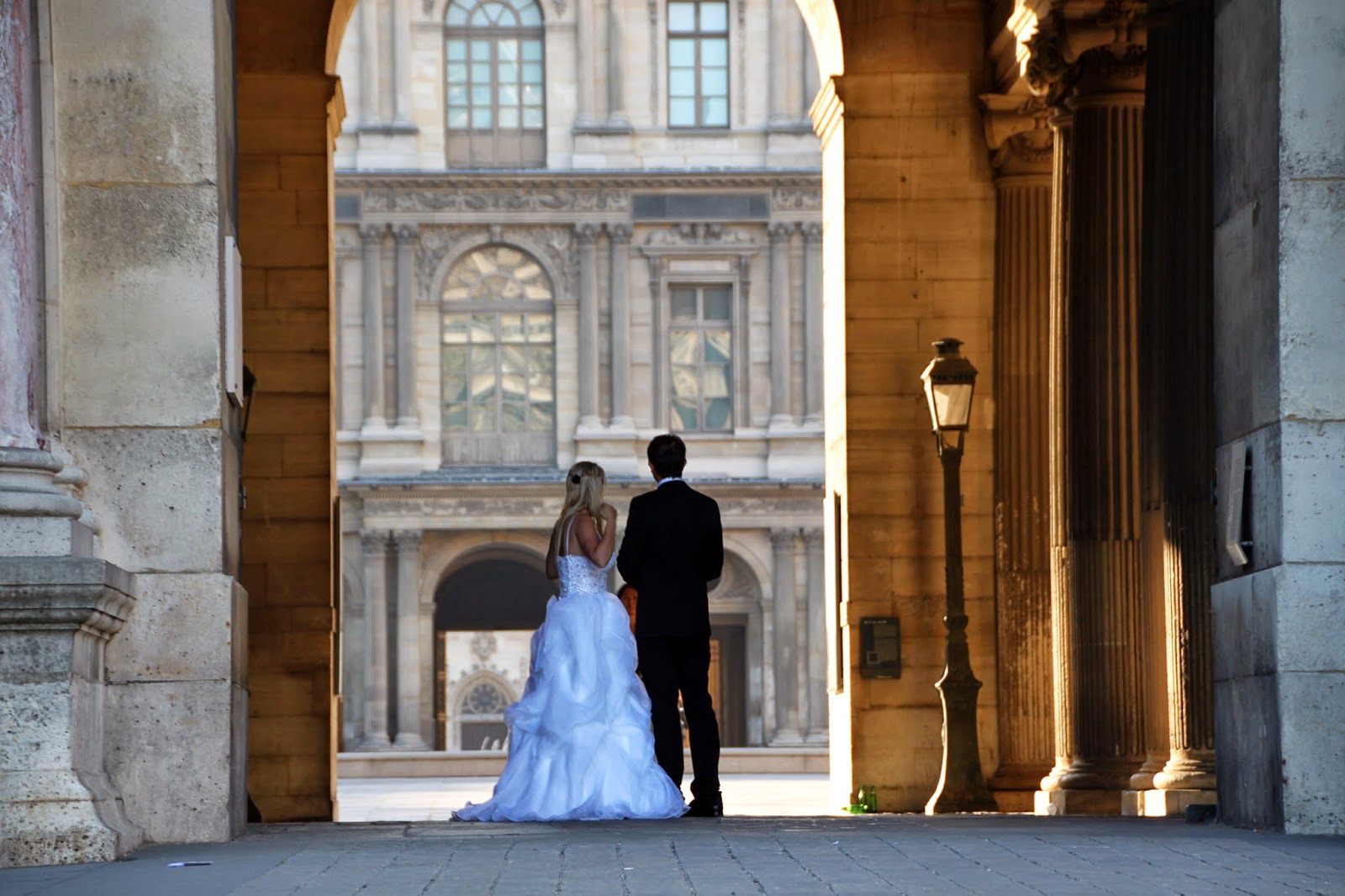 After breakfast, we decided to visit the Musée des Arts Decoratifs (Museum of Decorative Arts and Fashion) and the Musée de l’Orangerie – an art gallery of impressionist and post-impressionist paintings.  The gallery is the permanent home for eight murals, “Water Lilies” by Claude Monet and also contains works by Pablo Picasso, Pierre-Auguste Renoir (my favorite), Paul Cezanne and many others.