Oh my goodness! I am in Monaco on the French Riviera! Can you believe that?

Let me just say that it’s nice to see how the other half lives!

When I refer to Monaco as tiny . . . I mean TINY.  If you recall, earlier in our travels we stopped in the principality of Liechtenstein on our way to Switzerland. Liechtenstein is only 62 sq. miles.  I thought that was tiny.  Well, I stand corrected.

Monaco is bordered on three sides by France and on the remaining side by the Mediterranean Sea. Now get this: according to the Internet, Monaco has a population of 35,986! Talk about packing them in like sardines! It is the MOST densely populated country (per square mile) in the world.  The residents live in high-rises, which makes sense . . . they have to build vertically since there is no land! So, who lives in Monaco, you may ask? According to the CIA World Factbook, Monaco has the world’s lowest poverty rate, and the highest number of millionaires and billionaires per capita in the world. Well, alrighty then! 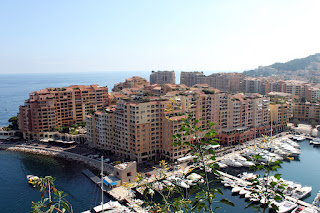 Monaco is known as a principality as it is a constitutional monarchy headed by a prince. The reigning prince is Albert Alexandre Louis Pierre Grimaldi – known as Prince Albert, II. He is the son of Rainier, III and Grace Kelly. I found it interesting that Prince Albert was educated in the states. He graduated from Amherst College in Massachusetts. I also thought it was interesting that Monaco became a full UN voting member in 1993. That’s a lot of clout for such a small principality.

It’s hard to take Monaco in. There’s so much to see in such a small area. Upon arrival in Monaco, the first thing that stands out is “The Rock of Monaco”.  It is basically a mountain made out of one massive rock that overlooks the city. The oldest section of Monaco (Old Town) is built on The Rock as well as the prince’s palace, the cathedral, and the Oceanographic Museum.
We hiked up the hill and hit all the points of interests in Old Town. It is spotlessly clean and I felt like I was walking in a story book kingdom.

Regarding the palace and the Grimaldi family, their history is very interesting. I hope to return to this section and share more details later. 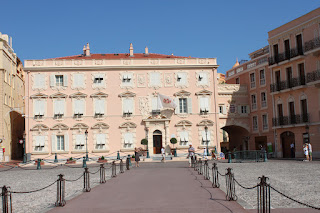 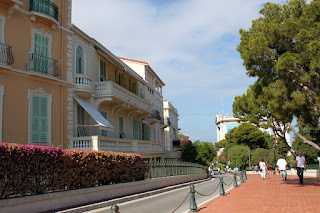 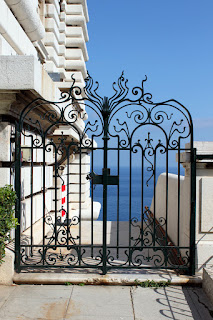 After exploring Old Town, we walked down the hill and headed to Monaco’s most famous quarter – Monte Carlo. We passed by the harbor and saw many beautiful boats there. We also heard an announcement that was broadcast to the entire area via loud speakers that tonight the fireworks competition would be held at the harbor. It was delivered in French, English and Spanish. I recorded it so you could hear.

Monte Carlo is beautiful. I love the architecture and all the french embellishments. We went to the authentic Monte Carlo Casino and it is gorgeous inside. I was not allowed to take pictures, unfortunately. Let me just say that the replica in Las Vegas is nothing like the real thing! I walked from room to room with my mouth open.
As we were walking past the high-end shops in Monte Carlo, I saw this older gentleman admiring an outfit in the window at Valentino’s. You can see he has quite a fashion sense! 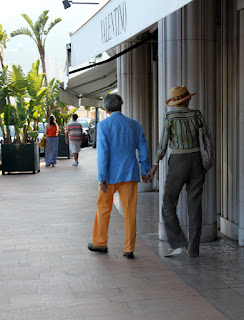 We spent the evening at the harbor watching France compete in the International Fireworks Competition. It was awesome. Stan managed to get some footage with his trusty iPhone.