We got a late start today.  We had to check out, gas up, get permits, have lunch and we were finally ready to hit the road.  Destination: Salzburg, Austria! Yay! One of my most favorite places in Europe.

The drive from Munich, Germany to Salzburg is only a couple of hours.  It’s a good thing too because Stan was testing out Maximilian’s horsepower on the autobahn.  I cannot disclose how fast he was driving because my mother is sure to make a phone call, but let’s just say Max can haul!

Yes, I named the car.  Maximilian suits him, don’t you think?  We call him Max for short.

The countryside was breathtaking.  As we got closer to the Austrian border the mountains came into view and the contrast of quaint towns and farmlands against a backdrop of mountains was so beautiful.  I tried to take pictures but it was very difficult to capture anything more than a blur thanks to Max.  We did encounter some road construction for a few miles which allowed me to snap a few pictures but I assure you these shots (and my lack of photography skills especially when hanging out of the window) leave a lot to be desired.
We arrived in Salzburg late afternoon and found our hotel right in the heart of this beautiful city.

The Hotel Sacher, formerly the Osterreichische Hof, was built between 1863 to 1866 by the hotelier and master builder Carl Freiherr as an “Austrian court” hotel. It enjoyed great popularity due to its position with members of ruling houses, noblemen, high clergymen and artists. With the beginning of the Salzburg festival, the hotel became the social center of the festival, housing great musicians and heads of European society.

In 1988, the Gürtler family purchased the hotel and I believe that is when it was renamed, The Hotel Sacher, however I’m not certain about the time-line.  In addition to renovating the hotel while keeping it’s original historical style, another interesting piece of history revolves around a torte! The story goes that in 1832 a 16 year old apprentice cook, Franz Sacher, created a wonderful torte dessert at the court of Prince Metternich. It has since become world famous and the hand-written recipe is a well-kept secret of the hotel. You can bet I am going to have a slice!

This hotel is so nostalgic.  All the room keys (yes, old fashioned keys on large key rings) still hang on hooks behind the desk clerk and when you go out for awhile, you give the desk clerk your key to keep for you.  (I know security bells and whistles are going off in every reader’s head, but hey, it’s nostalgic.) The porter stands outside by the front door to assist guests with luggage (just like the movies). The valet, Klaus (who was adorable by the way) escorted me to my room and pointed out where everything was – the closet, the lights, the temperature control, bathroom, and my personal favorite . . . he told me my bath coat was hanging behind the door.  How cute is that?  I love that I have a bath coat! 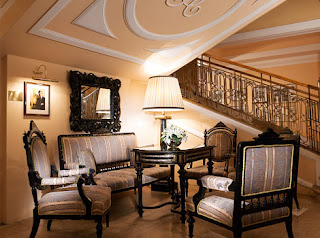 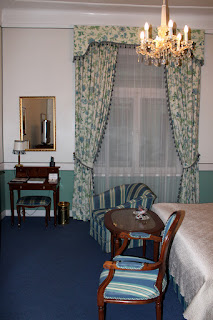 All Things BMW Heaven On Earth
Scroll to top