I am happy to
report that we discovered there is a tiny clock display on our phone in our cabin so now we
know what time it is! We have to put our reading glasses on to SEE it . . . but at least we know the time! LOL.

I was so excited
to visit
for the first time today. We had to be on the bus by 8:00 AM so the alarm went
off bright and early. My dear cabin-mate can get ready in a flash so that
leaves plenty of bathroom time for me! Yay!

We had a sweet
young man as a tour guide today. He is from and an art history major so he was
the perfect tour guide for me since I love history and details. Our first stop was where I got to see
the famous Leaning Tower of Pisa, the Pisa Cathedral, and the Baptistery. They are beautiful examples of Romanesque architecture.

Construction of the Campanile (bell tower) began in 1173 and continued for 200 years due to the onset of a series of wars. It was designed as a circular bell tower and was constructed of white marble. There is a 294 step spiral staircase inside leading to the top – which I did NOT climb! The tower’s foundation of soft soil (composed of mud, sand and clay) began to settle before the tower was completed and for hundreds of years, engineers have been trying to remedy this situation.

After , we boarded the bus and after a one hour drive
through the beautiful Tuscan countryside, we arrived in .


Our tour
included several of the sites that I visited the last time I was here (2009)
and I was so happy to see them again, especially the magnificent Statue of
David.


Our first stop
was the Duomo (cathedral), Campanile (bell tower), and Battistero (baptistery).
The Duomo is the world’s fourth largest church and the tallest building in . It is the
grandest building project ever undertaken in , and the russet-colored dome is
considered the greatest engineering feat of the Renaissance. The ornate
cathedral and bell tower are decorated in white, green and pink Tuscan marble. 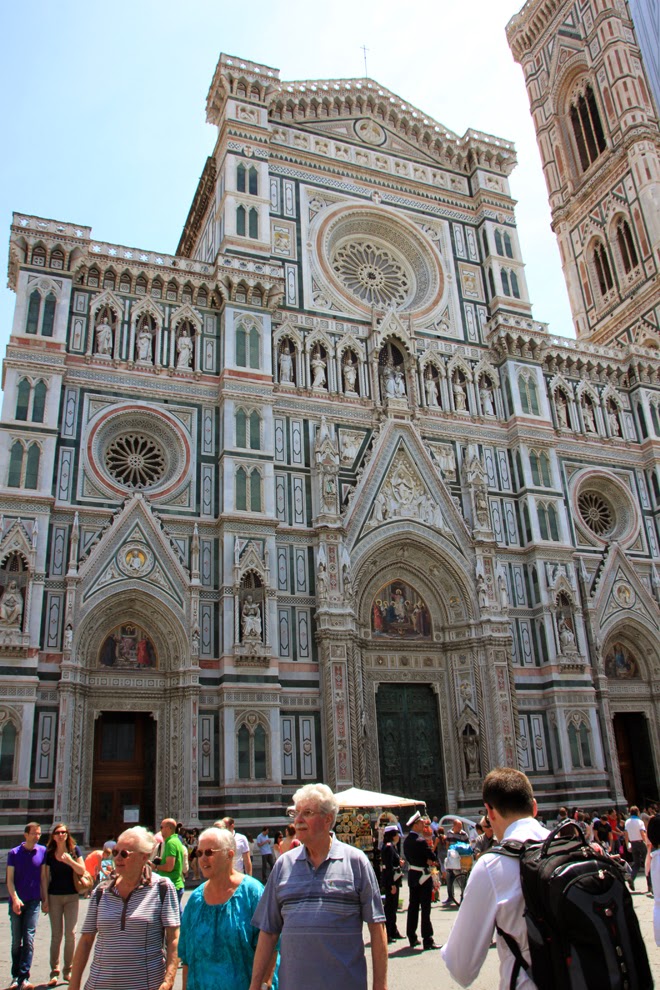 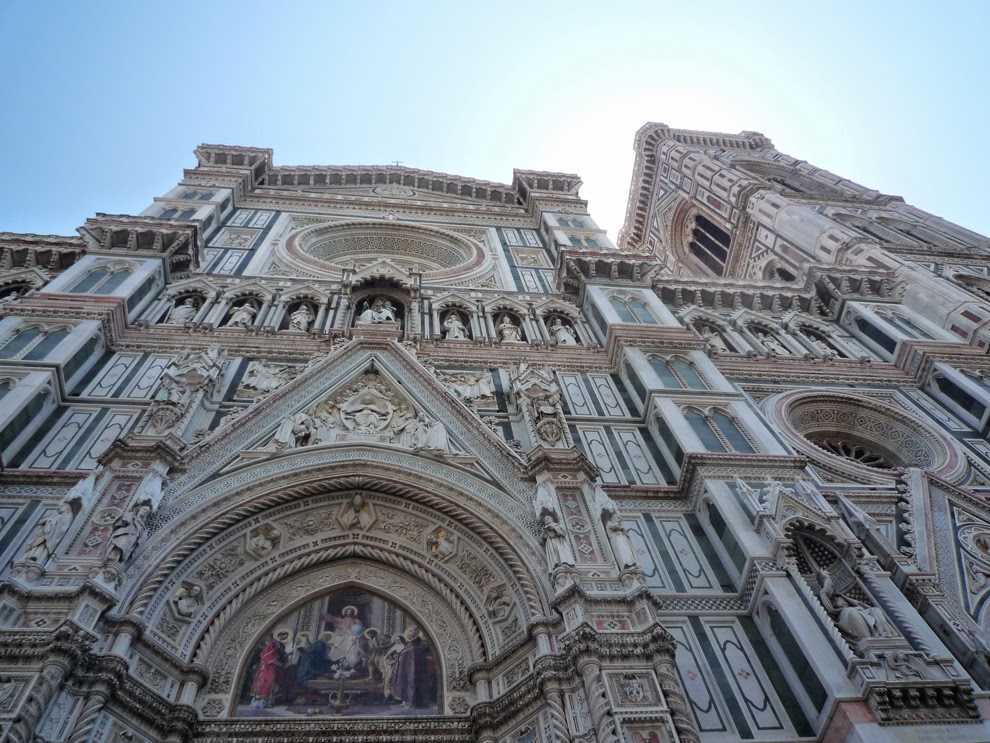 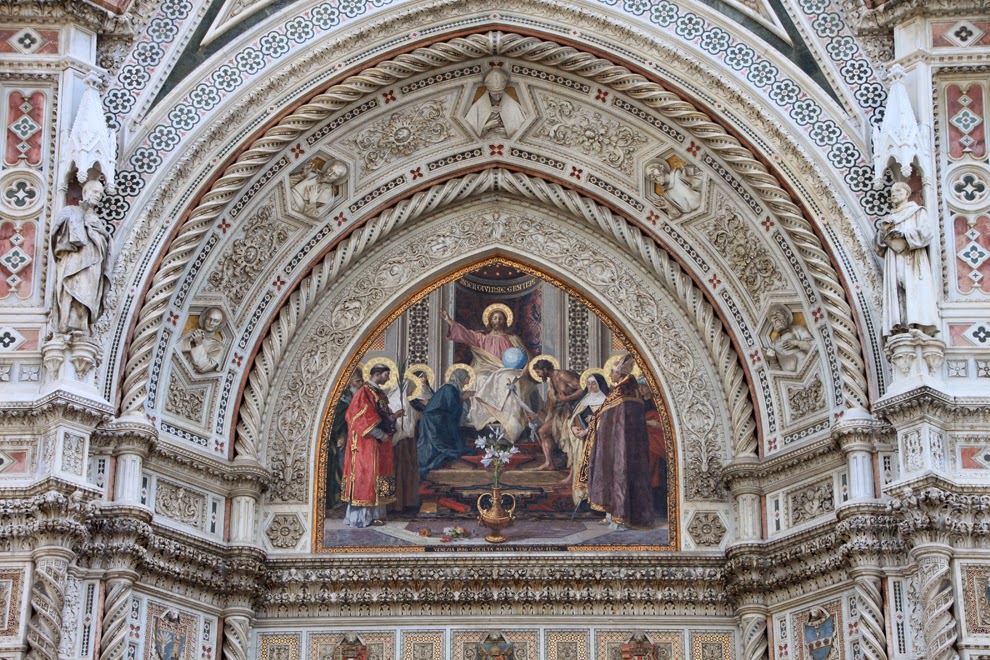 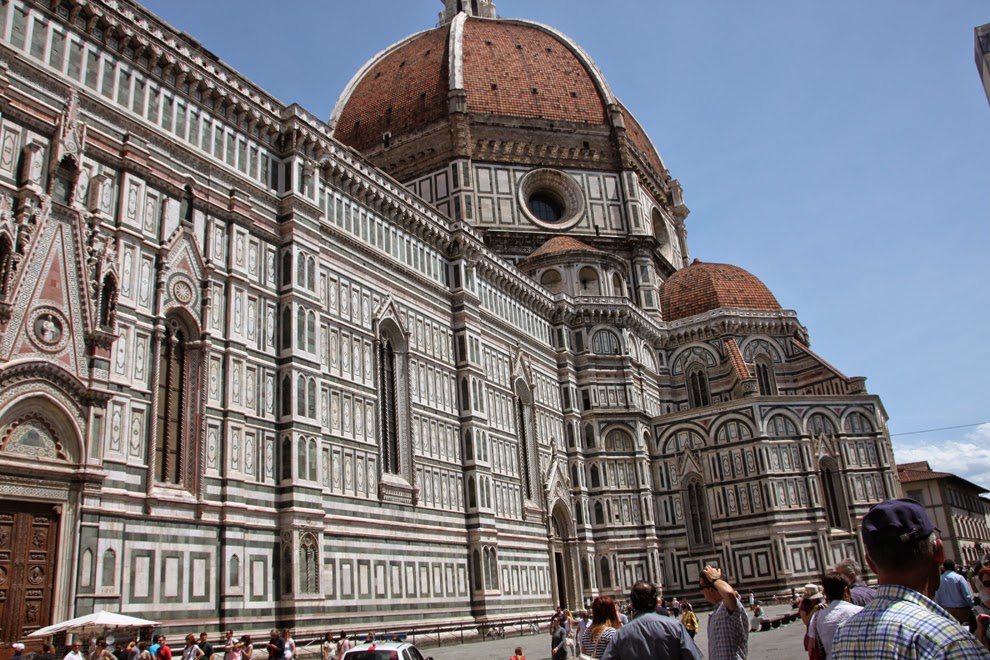 The Battistero
has three sets of bronze doors. The reliefs on the south doors (designed by
Andrea Pisano) portray scenes from the life of the Baptist; the north doors (designed
by Ghiberti) depict scenes from the life of Christ; and the east doors
(Ghiberti) depict Old Testament scenes. The doors are beautiful and I felt so
privileged to see them in person, although some of the bronze panels are copies
of the originals which are being preserved in the museum.


Another stop was
Ponte Vecchio () which crosses the
River Arno running through the heart of the city. There is so much history
surrounding this bridge it would take too long to share.  I read that there has been a bridge here
since Roman times, but the current Ponte Vecchio dates from 1345 when it was
built to replace the former wooden structure that was swept away by an
overflowing river. The Ponte Vecchio is the only bridge in the city to escape
destruction in World War II. 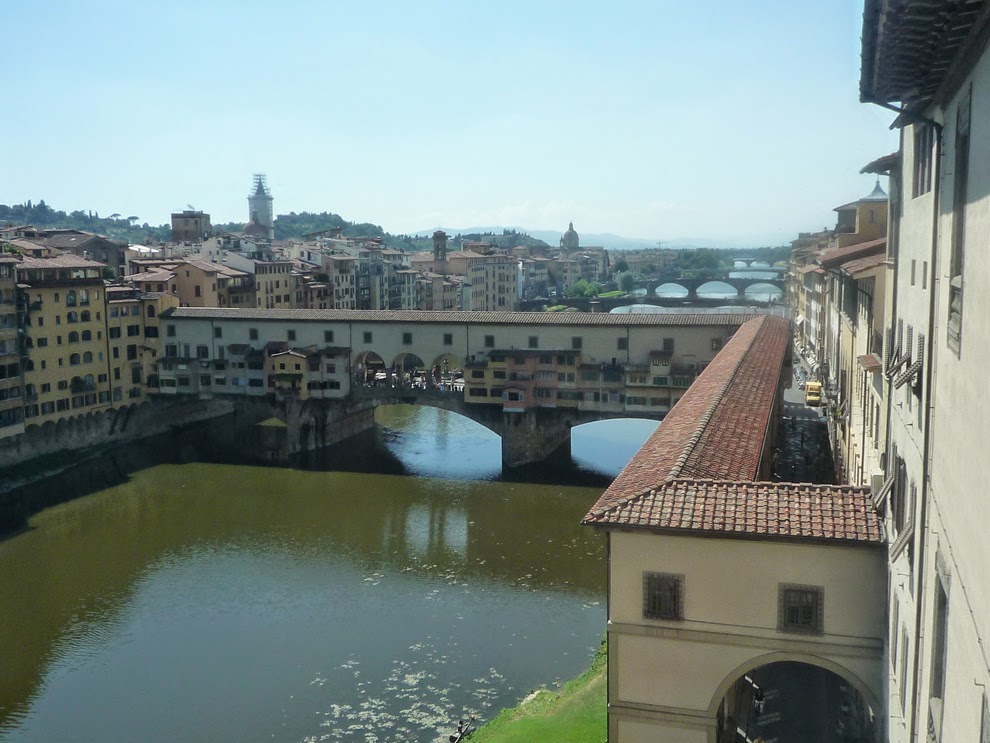 The highlight
for me was the Galleria dell’Accademia where I saw Michelangelo’s David. There
are many beautiful pieces in the Galleria, but I spent most of my time staring
at this magnificent sculpture.  Michelangelo
created this piece from a single block of marble when he was just 29 years
old.  There are no words to describe its
beauty.


As I sat beneath
David, Kris asked me how tall Goliath was. I pulled up my Bible app on my
cell phone and read the story of David and Goliath to some of the women sitting
next to me. By the time I had finished the story, we all had tears in our eyes.
One woman commented, “I am so glad I sat
next to you.” There is no way to describe the powerful emotions this beautiful
work of art elicits in me . . . I’ll just leave it at that. Unfortunately, we
were not allowed to take pictures.


Kris and I
stopped for a quick bite to eat at a typical little street café before heading
back to the meeting point for the tour.
Kris loves finding authentic dining places off the beaten path where the
experience, service and food are less geared toward tourists.  The pizza was yummy and we got to visit with
a really nice young woman from .


Back at the
ship, there were activities all night to choose from. Tonight was Country and Western Night.  I decided to turn in on
the early side since we have a 7:30 AM departure time for our tour to tomorrow.