The name of the game in Paris is, “Embellishments On Top of Embellishments”. This city seems to adhere to the “more is better” philosophy. It actually suits me just fine!

The morning was overcast and a little cool. Lucky for me I packed a jacket! We navigated the subway system and our first stop was the Fragonard Musee du Parfum (Museum of Perfume). We took a quick walk through the perfume exhibits which explained the history of perfume manufacturing and got to sniff samples of common ingredients used to create scents. After the tour, we went to the boutique where I had fun trying on LOTS of perfumes and happily walked out with five of my favorites. Woo! Hoo! I smell pretty!

Next stop was the not-to-be-believed, oh my goodness, unbelievable, you gotta be kidding, Opera House. Seeing the Opera House was worth coming to Paris for. I would plan a special trip just to see this building. The Palais Garnier was built on the orders of Napoleon, III. The project for an opera house was put out to competition and the contract was won by Charles Garnier, an unknown 35 year old architect. How’s that for a career break of a lifetime? It was built from 1860 to 1875. There is no way I can possibly describe the opulence, the Baroque architecture, the history, and the “grand-ness” of it all. You just have to visit Paris and see it for yourself.
Our tour guide told us that Palais Garnier is the original setting  of my favorite opera, “Phantom of the Opera”. In answer to a question about the chandelier falling, he said in 1896, one of the chandelier counter-weighs fell on a concierge tragically killing her. In addition, members of the theater claimed to have heard strange sounds from the basement and maze-like corridors, thus refusing to enter these parts of the building. The Phantom’s box is said to be No. 5.
The Grand Foyer certainly lives up to it’s name! I gasped when I walked through the door. There is so much detail in this room, I could not take it all in. The magnificent ceiling painted by Paul Baudry portrays themes from the history of music – biblical scenes are portrayed on one side, and mythological on the other side. Every square foot of this room is embellished. It is unbelievable. 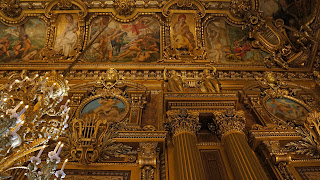 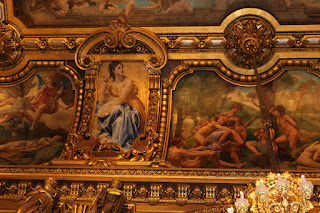 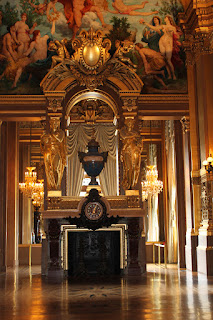 Before taking a lunch break, Stan took a short video of the streets of Paris from the terrace of the Opera House. You can experience some of the hustle and bustle.

After lunch, we hopped on a subway and then a commuter train across the Seine to the Musee d’ Orsay. This museum building was originally a railway station. By 1939 the station’s short platforms had become unsuitable for the longer trains that were in use. It was almost demolished in 1970 but through a series of events it was renovated and turned into a museum in 1986. There are about 2000 paintings, 600 sculptures and other works of art from the period 1848 – 1914. I was privileged to see works of Degas, Monet, Van Gogh, Renoir, Manet, etc. We had headphones that allowed us to hear the background and artistic points of many of the popular works which added so much to the experience of viewing them. What a great afternoon! I could have easily spent a full day there. Unfortunately, pictures were not allowed. 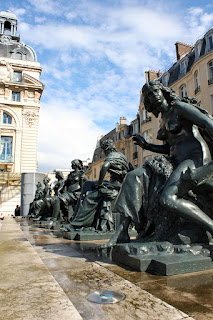 Our final stop for the day was the Arc de Triomphe (Triumphal Arch) – one of the most famous monuments in Paris. The Arc honors those who fought and died for France in the French Revolutionary and Napoleonic wars. All the French victories and generals who fought are inscribed on it’s inner and outer surfaces. Beneath its vault lies the Tomb of the Unknown Soldier from World War I. It’s design was inspired by the Roman Arch of Titus.

An interesting fact I learned today: Three weeks after the Paris victory parade in 1919, Charles Godefroy flew his Nieuport biplane through it! My grandmother would have been 10 years old at the time.
Oh . . . there is so much that I am leaving out. There just isn’t time to record it all. The history fascinates me and I am having so much fun learning about the places we have visited. Tomorrow is another full day. I better get to bed. I had a hard time getting up this morning.
July 11, 2012/0 Comments/by H.A. Schiavone
https://theeventcenterofmoorpark.com/wp-content/uploads/2022/03/The-Event-Center-Banner-300x77.jpg 0 0 H.A. Schiavone https://theeventcenterofmoorpark.com/wp-content/uploads/2022/03/The-Event-Center-Banner-300x77.jpg H.A. Schiavone2012-07-11 23:04:002012-07-11 23:04:00Embellishments On Top of Embellishments
0 replies