Happy Independence Day! It feels so strange to be away from home during our nation’s birthday celebration!  Today at lunch, we met a mother and daughter from Kansas. We lifted our glasses and toasted our great country. May God bless America and keep her safe from harm.

Today (Wednesday) we got up early and headed to the city of Siena. As we were driving to the city, I took this picture of a vineyard. It was a little before 8:00 AM.
Maximilian had an appointment for his first 1200 mile service, so we dropped him off at a BMW dealer and headed to the city center in Siena.
My introduction to the heart of Siena was passing through the massive gates that once protected her. It felt like I was being transported back in time. Suddenly, I was standing in an ancient walled city.
Our first stop was the Piazza del Campo (pictured above). Stan, armed with his trusty iPhone, began to look up the history of the city and thus our tour began.

We learned that Siena retains a “ward-centric culture” from medieval times. I think there are 17 districts and each one has their own boundary and distinct identity, and each are represented by a mascot (usually an animal). There are ward rivalries which play-out in a big way during the annual horse races (Palio).

We found out that the infamous Palio had just taken place in the Piazza this past weekend. The Palio is held twice per year (July and August) and lasts for eight days. All 17 districts take part in the race but only 10 (by rotation) get to nominate their jockeys for competition.

In a nutshell, riders wearing historic medieval costumes, race around the Piazza three times (riding bare-back no less) and the winner is awarded a flag that will adorn the streets of his district for the following year. (I was  disappointed I missed the event by two days . . . although we heard the whole town goes crazy . . . maybe just as well.) I found a YouTube video from last year’s race that tells the story. This is great and it gives you a view of the city as well. The race seems a little dangerous – not much protection for the riders or the spectators!
Our next stop was the Siena Cathedral. It is a marvel. It is a feast for the eyes. It is overwhelming. I could never do it’s description justice.  What amazes me is how these great cathedrals were constructed without the aid of Autocad and power tools! What further amazes me is that these buildings are hundreds of years old. This cathedral was built in the 1200-1300’s. 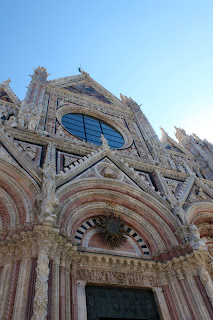 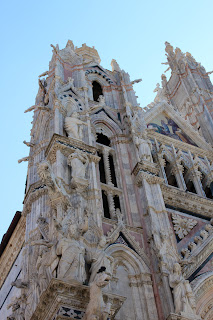 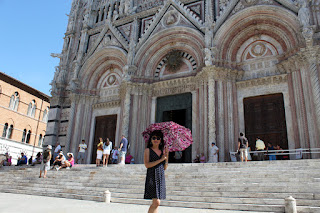 We were not allowed to use flash inside the cathedral so I pulled this photo off the Internet. The resolution may not be very high.
Adjoining the cathedral is the Piccolomini Library. My jaw hit the floor when I walked in.  There are frescoes (1502-1507) painted around the entire room that tell the story of Siena’s favorite son, Cardinal Enea Silvio Piccolomini, who eventually became Pope Pius, II. The ceiling is covered with painted panels of mythological subjects (1502-1503). There are no words. Again, I was not allowed to use flash, so here are some shots from the Internet.

More of Italy, 2012 Last Day in Tuscany
Scroll to top