This morning (Saturday) started out with a bang . . . or rather, a poof!

Long story short, I couldn’t find the hair dryer the hotel provided (it was hidden in a drawer), so I plugged MY blow dryer into the outlet using an adapter.  Not a good a idea. There was a pop, fire and all the lights went out. Oops! Apparently the outlets here are only 100v and my blow dryer requires 120v.  The facilities guy scolded me in German, moved the dresser and plugged the hotel’s dryer in for me in front of the mirror so there can be no further excuses for blowing the electricity. Well, alrighty then.

Then . . . there was some confusion about where we were supposed to have breakfast. The Executive Lounge sent us downstairs to the main restaurant; the restaurant sent us back up to the Executive Lounge.  Apparently there was some confusion with our room numbers. Stan finally told the restaurant we would be dining with them and they could work it out amongst themselves. (These pushy Americans!)

Finally, we were getting ready to leave on our guided WALKING tour and I realized it was raining! I had to go back to my room and change into weather appropriate clothes and shoes and get a sweater.

Our tour guide was great.  His name was Herbert and he was born and raised in Vienna. Perfect!  He told us that he had to complete a two year course at the university to become a certified tour guide.  He was passionate about his city and entertained us with interesting stories and jokes along the way.
I cannot do justice to the history and architecture in this city. We covered a span from the 1200’s to 1800’s in two hours! Just to give you an example of the history behind one building – check this out:

St. Stephen’s Cathedral is the most important religious building in Austria’s capital and has been central to many important events in it’s history. Here is a rough time-line:
Note: This cathedral was made of sandstone which is very porous and absorbs all the dirt and pollution so sections are always being renovated (cleaned). That’s why some of the building looks light and other sections are black.

Pretty incredible, huh?  I am always struck with “awe” when I stand in a place that is several centuries old.  I can hardly take it in.  One cathedral that was built in three different styles over 400 years! I wonder about all the important political and social events that took place there. For instance, this is where Mozart was buried. Inside there are alters, a stone pulpit, chapels, tombs, catacombs, crypts and organs that are historical in-and-of themselves. It would probably take a whole year to absorb all the information and history of this single cathedral!  And the city is full of historical buildings like this. Can you imagine?

Here are photos of buildings we saw.  I’ll save the history lessons.  Enjoy! 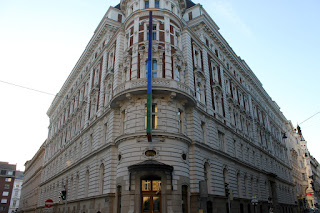 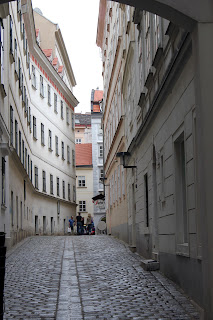